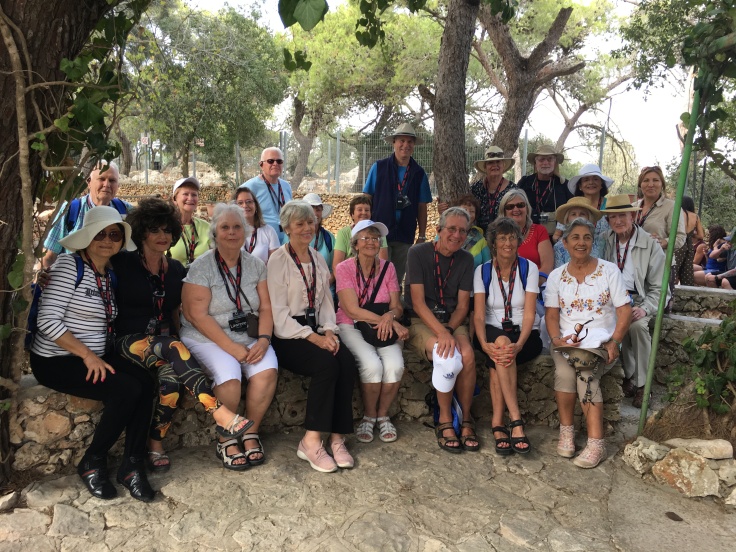 This morning went to breakfast in the hotel. What a great buffet. They had all kinds of vegetables, breads, salads, fish, main dishes, desserts and coffee from Americano to Capacino.  All good and if you know me I love all kinds of foods.

We left at 8:00 am.  Our guide is David and he is from Minnesota!  Very knowledgeable and also funny. Our first stop was Caesarea National Park. The park extends from the Roman Theatre, to the Crusader City. It includes the Byzantine Square, the Herodian amphitheater, and promontory palace. The theatre was built in Herod’s time. The amphitheater was built by Herod probably used for horse racing, sport events and entertainment shows during the Roman period. This area had various periods of people such as Arab, Crusader and in 1251 king Louis IX of France fortified Caesarea with new intensity. The Mediterranean Sea is beautiful in this area  Then we left there and went to Megido National Park.

Our next stop was Megiddo National Park. During  biblical period it was one of the most important cities in the country. It’s location allowed it to control the Iron Valley to the Jezreel Valley and an international trade route that linked the ancient world powers of Egypt and Mesopotamia. It also became the arena of frequent battles. The song of Deborah: “The kings came, they fought ; then fought the king of Canaan in Taanach by the waters of Megiddo”.  Judges 5:19 Christian tradition identifies Megiddo or the Jezreel Valley as Armageddon where the great battle of the End of Days will take place between powers of good and evil. Revelation 16:16. The prophet Zachariah also describes such a battle in the valley of Megiddon Zechariah 12:11.

Then we went to Mt Carmel. This is where in I Kings 18 Elijah defeated the prophets of Israel Baal during the reign of King Ahab. The fire of Jehovah fell and consumed the burnt offering and all.

Last stop was Nazareth home of Jesus, his mother Mary and Joseph. We didn’t go to area where they had lived was getting late. But stopped to view area from part of Nazareth. Just to think to look at that area was where Jesus was raised and where the angel of God,  Gabriel came to Mary to tell her of the birth of Jesus.

We got back went to dinner. Buffet style food very good. Came back to room showered and worked on my blog until 1 am even though I was tired.